Carla Accardi was born in Trapani on October 9th, 1924. After the diploma in classical studies, in 1943 she attended courses at the Academy of Fine Arts in Florence. In 1946 she settled in Rome together with the painter Antonio Sanfilippo, whom she married a few years later; here Accardi met artists such as Consagra, Attardi, Dorazio, Guerrini, Perilli and Turcato, with whom she signed the manifesto of the Forma 1 group in 1947. She took part in various group exhibitions in Italy and abroad and in 1950, she held her first solo show at the Age Gallery D’Or of Rome, with a presentation by Giulio Turcato.
During the 50s, the artist developed a research based on a poetic of the sign, which is articulated in sets of white pictorial segments spread over black backgrounds. In 1959, two major solo shows took place: one at the La Salita gallery in Rome and the other at the Galleria di Torino in Turin with a presentation by Michel Tapié. Accardi’s artistic research has been characterized by a continuous experimentation of new techniques and materials such as transparent surfaces of sicofoil.
In 1988 the artist exhibited at the Venice Biennale with a personal hall. Some of the major solo exhibitions have been hosted by galleries such as the Salvatore Ala Gallery in New York, the Galerie Di Meo in Paris, the Museum of Contemporary Art in the Castello di Rivoli in Turin. In 1996, she was conferred the title of “Academic of Brera” in Milan, and the honor of Cavaliere di Gran Croce from the President of the Republic in Rome. The artist died in Rome on February 23rd, 2014. 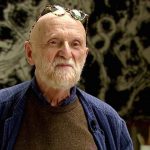